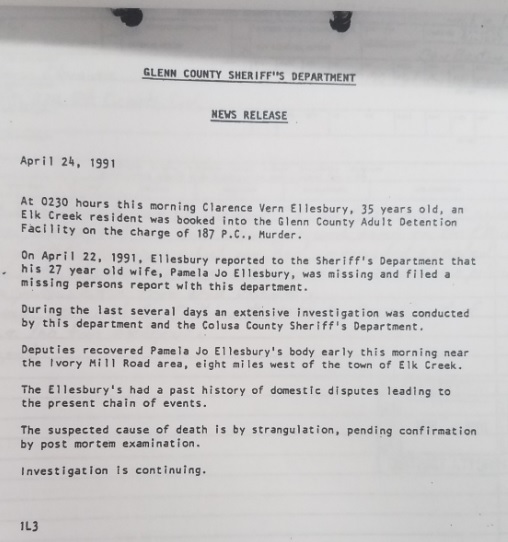 PAROLE DENIED!
PEOPLE V. ELLESBURY, CLARENCE - In 1992, Inmate Clarence Vern Ellesbury was convicted of Penal Code section 187, Second-Degree Murder for killing his wife. The murder occurred when Ellesbury learned his wife had been unfaithful to him and he responded by strangling her to death with his bare hands. Ellesbury then packed her deceased body and her children into the car and drove to a remote location to dump her body. Please see the attached 1991 Press Release photo for more information on the facts of the case. The Glenn County Sheriff's Office then Detective Buxton and then Officer Randall (who later became mayor of Orland, California) later arrested Ellesbury when he attempted to return to his wife’s body with plans to conceal/dispose of it further in order to cover up his crimes. This case was originally prosecuted by DA Bob Holzapfel. Inmate Ellesbury was sentenced to 15 years to life and has had parole granted at the last 2 parole hearings. However, in reviewing the last 2 decisions to release Inmate Ellesbury, the Governor overrode the Parole Board’s decision and has kept Inmate Ellesbury in prison. A primary reason for a denial is that this Inmate continued to pose an unreasonable risk to the public.
On June 17th 2020, a 3rd parole hearing was held for Inmate Ellesbury at Deuel Vocational Institution (DVI) in Tracy, California. DDA Coffey attended the hearing on behalf of the Glenn County District Attorney’s Office to argue against the Inmate’s release on parole. After nearly 3 hours of testimony and deliberations, the Parole Board voted to deny Inmate Ellesbury’s parole for 3 years.

PEOPLE V. VILLASENOR-OROZCO, BARTOLO - Defendant was convicted of a felony violation of Penal Code section 288(a), Lewd and Lascivious Acts on a Child Under 14, to wit a 9 year old. Defendant was sentenced to 6 years state prison. This case was prosecuted by ADA Neumann with assistance from Glenn County Sheriff's Office Deputy Lemmon.

PEOPLE V. LAY, RONALD - Defendant was convicted of a misdemeanor violation of Penal Code sections 273.6 and 647(f), Violating a Domestic Violence Restraining Order and Drunk in Public. Defendant was denied probation and sentenced to 150 days in the county jail. This case was prosecuted by DDA Coffey with assistance from Glenn County Sheriff's Office Deputy Turner.

PEOPLE V. PENCE, JOSHUA - Defendant was convicted of a misdemeanor violation of Penal Code section 653m, Annoying Harassing Phone Calls/Texts and was found in violation of probation for the 1st time on a felony Penal Code section 273.5(a), Corporal Injury in Dating Relationship previous case. Defendant was sentenced to 90 days jail, 52 week Batterers Treatment Program, and probation was reinstated. This case was prosecuted by ADA Neumann with assistance from Glenn County Sheriff's Office Deputies Tuma and Johnsen.

PEOPLE V. GONZALEZ-MENDOZA, HUGO- Defendant was convicted of a misdemeanor violation of Penal Code sections 242/243(e)(1) and 148, Domestic Battery and Resisting Arrest. Defendant sentenced to 60 days jail and 3 years probation. This case was prosecuted by ADA Neumann with assistance from Orland Police Department Officers Pinedo and Fullmore and Sergeant Johnson.